The New West Twins had an unusual but exciting Victoria Day long weekend in Coquitlam.

Having only recorded their first victory of the season only 2 days before the start of the Mackin Yard tournament, the Twins began the tournament with a lopsided victory again the Coquitlam Blue Jays by the score of 11-1.  (Andrew Murray has 6 K’s and Aidan with 3 RBI’s)  The second game of the tournament saw New West bested their D6 rivals South Vancouver Yankees 9-2.  (Jack Sutherland had 3 RBI’s while Porter Dube Peregoodoff went 3 for 3 at the plate).  Rounding out pool play, the Twins were narrowly edged by a short-handed Hastings squad 6-5 with only 8 players.

In the cross over semi-finals, New West Twins faced our undefeated host, the Coquitlam Mariners.  The contest began as a low scoring affair with some great defensive plays.  With the score tied at the bottom of the 6th and the Mariners threatening to score with the winning run at third, Rex Yuen fielded a ground ball and fired it to Levine Punzalan for a tagged out at home for a crucial second out of the inning.  He followed that with a 6-3 put out to send the game into extra innings... 4 extra innings.  In the next 4 extra innings, the Twins’ bullpen was the difference.  Takeo Harvey and Andrew Murray came in and shut the door on the Mariners.  Together the 2 pitchers collected 3 K’s while allowed no hits.  On the top of the 10th, the Twins went to work.  Rex Yuen’s single, a Trevor Foley double, and a Levine Punzalan single, coupled with 2 timely passed balls, plated all three players and put the Twins ahead for good.  Aidan DeBeers assisted in all three putouts at the bottom of the 10th to seal the game and send the New West Twins to the finals.

In the finals, New West faced a talented Hastings squad.  Jack Morgan, Porter Dube-Peregoodoff, and Trevor Foley all contributed to the offence with multiple hits.  On the mound, Rex Yuen, Takeo Harvey, Jack Sutherland, and Andrew Murray combined to record 5 K’s while allowing 11 hits, and 2 walks for the victory.

Throughout the tournament, the Twins’ pitching depth was the difference with 7 different pitchers: Matthew Kenny, Jack Sutherland, Trevor Kwan, Takeo Harvey, Rex Yuen, and Porter Dube-Peregoodoff contributing from the bump.  And as a special mention, as the only 11 year old on the team, Levine Punzalan was a stalwart behind the dish for the Twins during the long 5 day tournament. 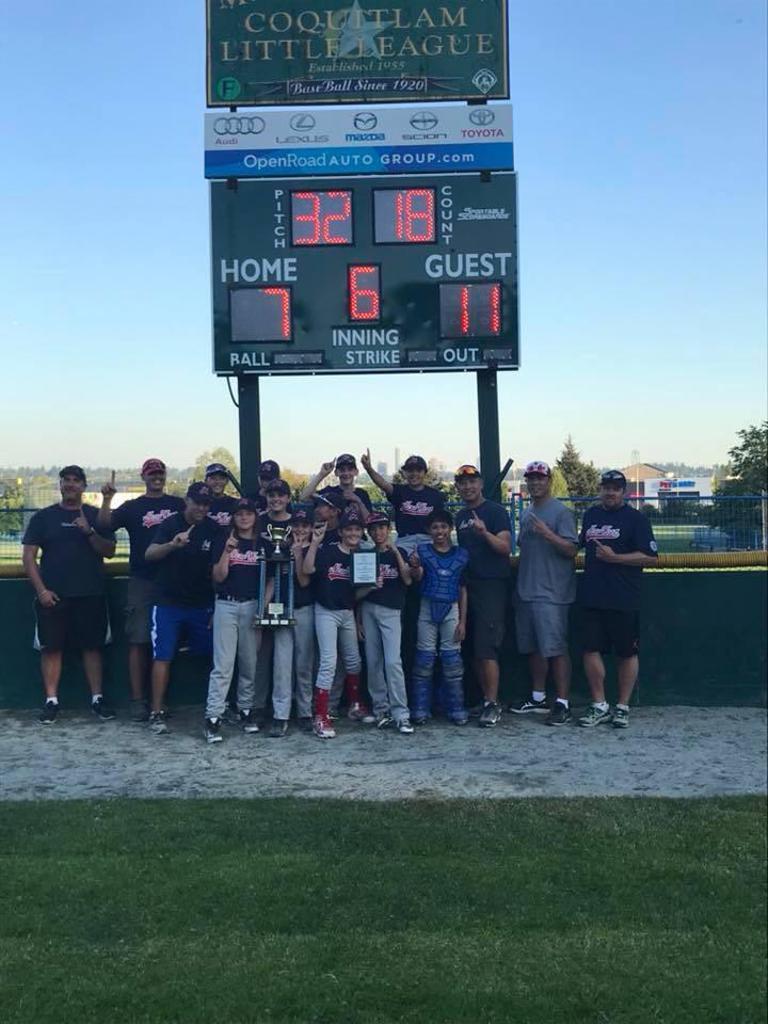